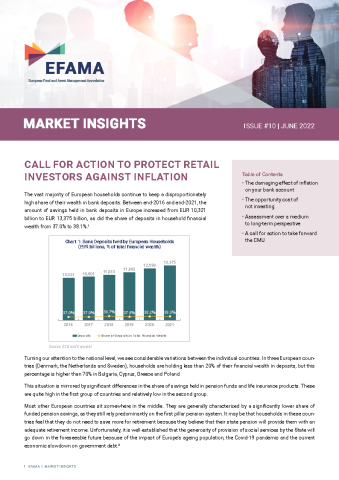 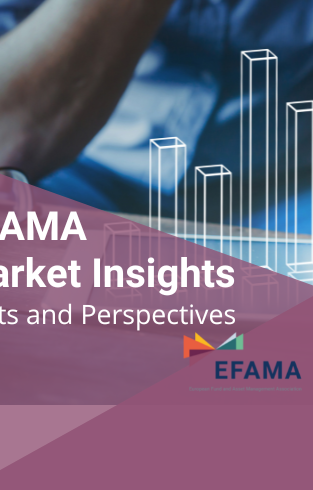 The risk of taking no risks: the impact of inflation.

EFAMA released today a new issue of its Market Insights series titled ‘Call for action to protect retail investors against inflation'.  This report highlights an undeniable reality: inflation has a very damaging effect on bank deposits.  It also illustrates the opportunity cost of saving excessively in bank deposits.  Finally, it recommends that Member States address this problem by providing a specific tax advantage to encourage people to transfer some of their savings from bank deposits into personal pension products, either through a one-off transfer or a gradual shift away from bank deposits.  To encourage people to act swiftly, the establishment of the tax advantage should be limited in time and could be part of a campaign to increase people awareness about the opportunity cost of keeping an excessive amount of savings in bank deposits.

Key findings of the report:

These estimations consider the net annual performance in real terms of UCITS equity and bond funds in 2002-2022 and assume that the average performance in 2022 would be equal to the loss observed in January-April 2022.

A call for action to take the CMU forward:

Following this approach would turn what is currently a problem – the loss of income related to the massive amount of savings held in bank deposits in an environment of rising inflation and much lower interest rates – into a unique opportunity to increase the potential return on people’s savings and strengthen the level of their income in retirement.

Bernard Delbecque, Senior Director at EFAMA, commented: “Such an approach would help deliver on the CMU’s overarching goal of making the EU an even safer place for individuals to save and invest long-term.  It should also be seen as a concrete policy response to the ageing population and an important opportunity to promote the PEPP.”

Tanguy van de Werve, EFAMA Director General commented: “Encouraging households to focus on long-term wealth creation and target an adequate retirement income should be a key priority for policymakers. We hope the upcoming retail investment strategy will include meaningful measures and recommendations to encourage citizens to put their savings to better use. These should include raising savers’ awareness of the impact of inflation on the value of their hard-won wealth and incentivizing them to put their money into long-term investment products.”