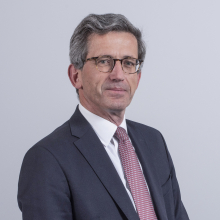 Tanguy became the Head of EFAMA in December 2018. In that capacity, he leads in the formulation of industry positions on the main policy developments and engages with relevant EU and international authorities.

He is a member of ESMA’s Securities and Markets Stakeholder Group, chairs FinDatEx’s Steering Group and teaches 'Business interest representation in the EU' at the College of Europe in Bruges. Tanguy is also a member of the IIFA Board and sits on the Administrative Committee of the European Parliamentary Financial Services Forum.

Before joining EFAMA, he was Head of the Brussels office of AFME (European investment banking industry - 2015-2018), Director General of Leaseurope and Eurofinas (European leasing and consumer credit industries – 2006-2015), and Head of Banking Supervision and Capital Markets at the European Banking Federation (2001-2006). Other relevant roles include positions at Euroclear and Dexia as well as non-Executive Director of Belgium-domiciled UCITS (2006-2018).

He holds a degree in law from the University of Louvain-la-Neuve (BE) as well as a diploma in Political Sciences & International Relations and a certificate of specialised studies (DES) in Financial Risks Management.